OM# (om-sharp) is a computer-assisted composition environment derived from OpenMusic: a visual programming language dedicated to musical structure generation and processing.
The visual language is based on Common Lisp, and allows to create programs that are interpreted in this language. Visual programs are made by assembling and connecting icons representing Lisp functions and data structures, built-in control structures (e.g. loops), and other program constructs. The visual language can therefore be used for general-purpose programming, and reuse any existing Common Lisp code. A set of in-built tools and external libraries make it a powerful environment for music composition: various classes implementing musical structures are provided, associated with graphical editors including common music notation, MIDI, OSC, 2D/3D curves, and audio buffers.

→ OM# is available on macOS, Windows, and Linux 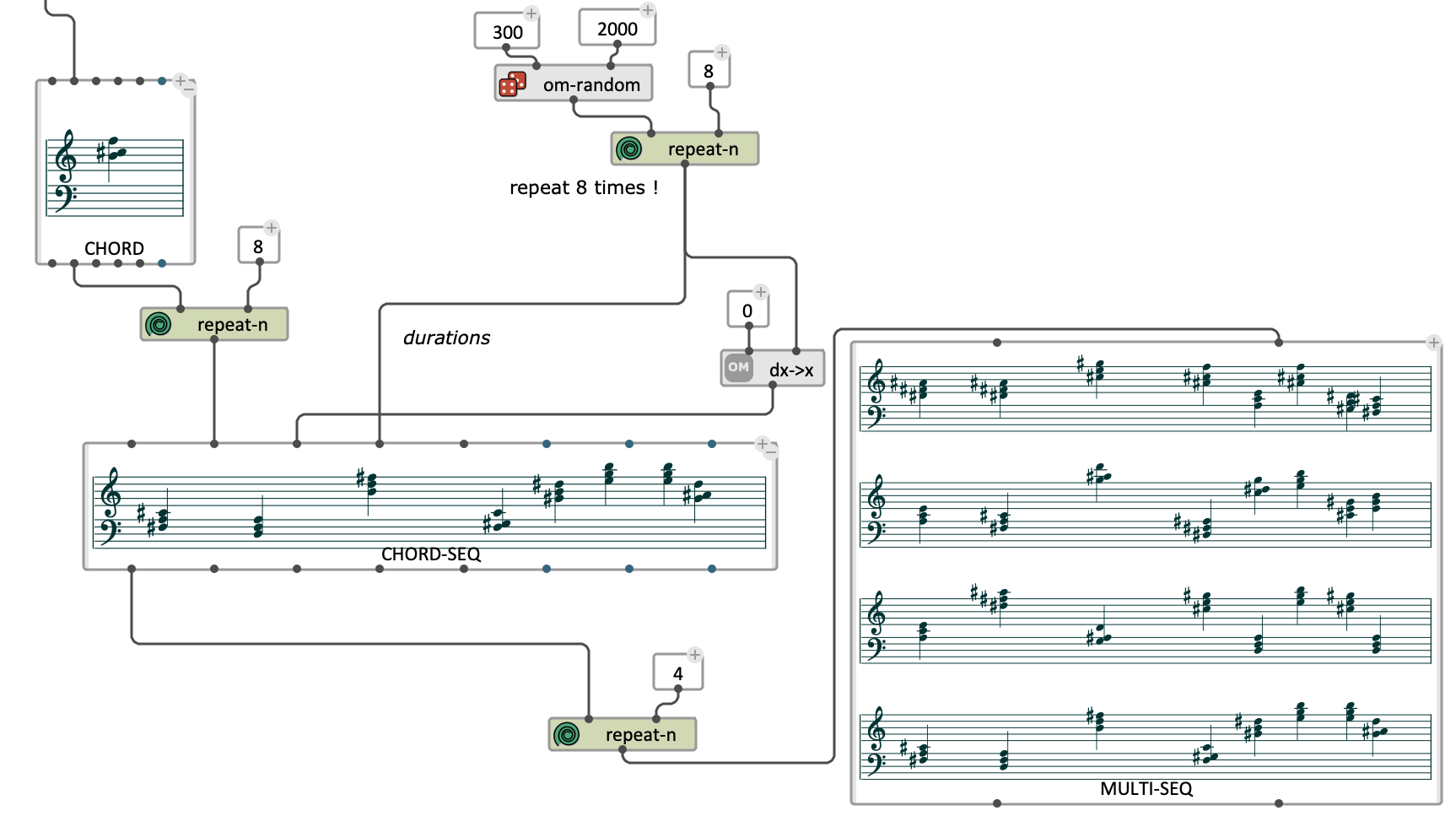 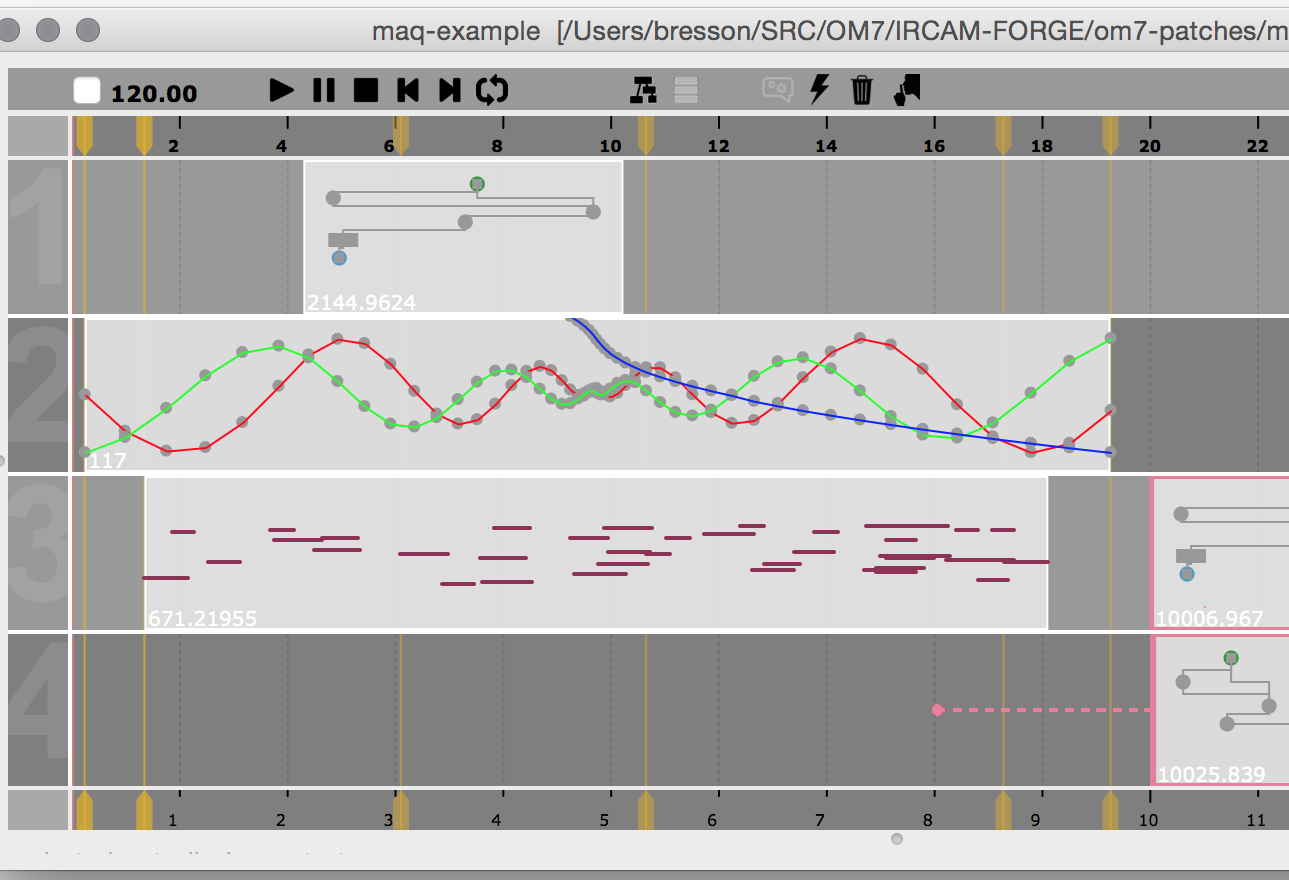 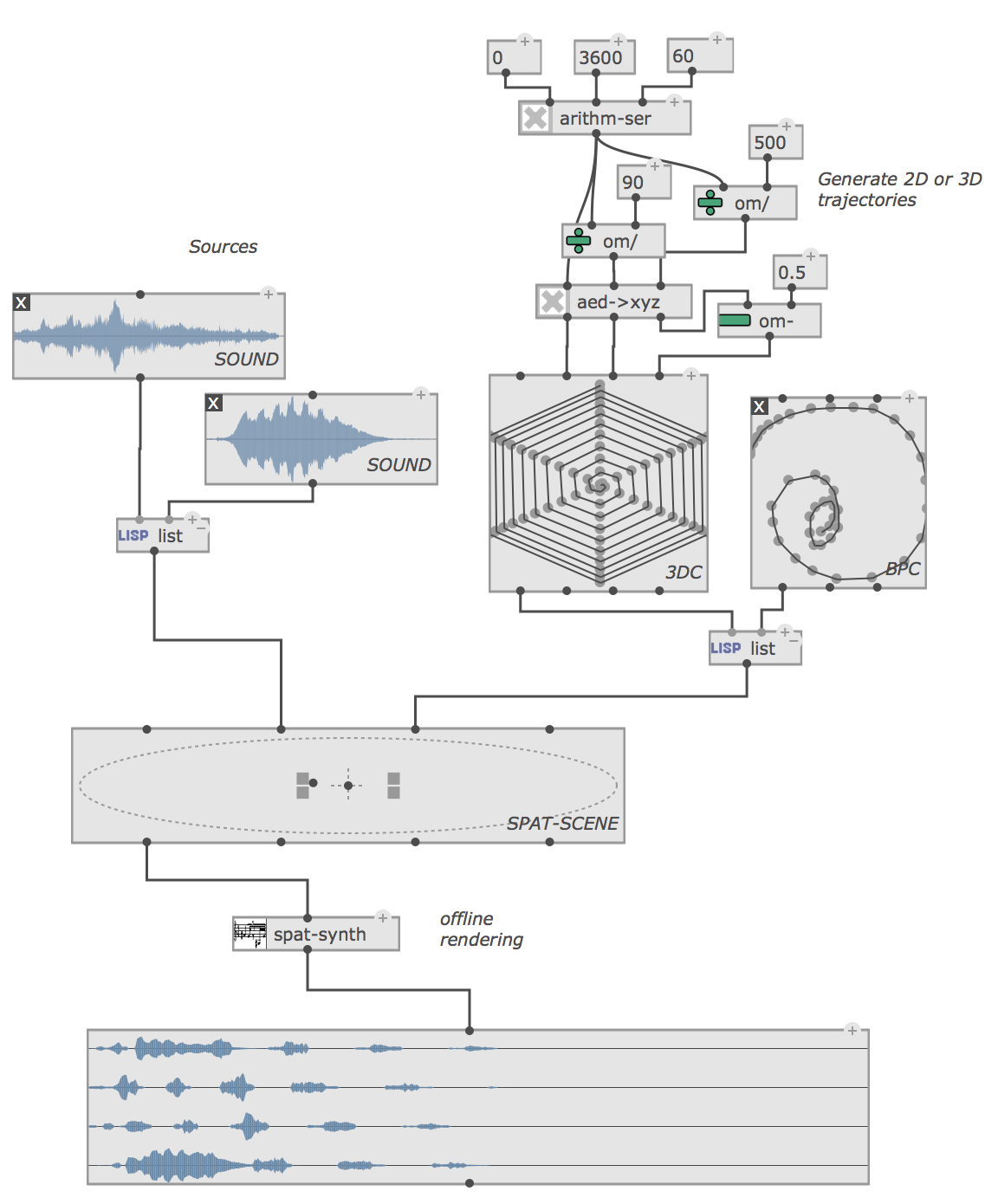 OM# includes a brand-new generation of tools and features in your computer-assisted composition environment:

OM# is a free software distributed under the GPLv3 license.

As a Common Lisp program, OM# can be considered just as an extension of Lisp including the specific built-in features of the application. The application is developed with the latest LispWorks compiler (7.1.2), which provides multi-platform support and graphical/GUI toolkits in Common Lisp. A limited “Personal” edition of LispWorks 7 is now available: its limited heap size requires compiling sources in several successive runs, and it is not possible to create new OM# executables with it, however, it allows to load and run/use/edit the program from the sources.

Alternatively, the OM# executable also includes a Lisp interpreter which can load and evaluate modifications and extensions of the program sources.

OM# can load patches created in OpenMusic. See the how to import OpenMusic patches.
Most OpenMusic external libraries are easily portable (or already ported). See how to create or adapt a library.
Report any problems in porting or converting libraries or patches on the discussion forum (see below).

See the new om-sharp-users repository.
→ Use the Issue Tracker to report problems, suggest features or enhancements, or just discuss about the project !

A discussion group is also hosted on Ircam Forumnet.
→ Create an account in order to post questions and replies.
Subscribe to group notifications using Watching / Tracking and other options.

External libraries are packages containing additional pieces of code that can be loaded dynamically in an OM# session. A few of them are readily available and listed below, as well as a number of compatible OpenMusic libraries.

OM# external libraries are structured as a simple folder, called either “libname” or “libname x.y” (where “libname” is the name of the library, and “x.y” is a version number), containing a loader file named libname.omlib.

About the general design and implementation of OM#:

OM# was also used as a support for research and production in a number of recent projects:

Design and development: J. Bresson, with contributions by D. Bouche, J. Garcia, A. Vinjar, and others (see Contributors). This project uses code and features from the OpenMusic project (by C. Agon, G. Assayag, J. Bresson and others, IRCAM STMS lab).